Problem: RaiseRite Concrete Lifting was contacted by a highway construction company to repair two bridge approaches in Sault
Ste. Marie, MI. Upon inspection of the road it was determined that the sleeper pads on each end of the bridge had settled about one inch. The sleeper pads had approximately 4” of asphalt poured over them. A proposal was written to use high density polyurethane foam to lift the sunken sleeper pads.

PROBLEM: The seawall was constructed with wooden sheeting. With the lake levels down for a few years, this wood dried out and when the levels returned had rotted. This allowed the material behind the wall to erode. As this material eroded, the grade that went up to the house which supported the deck, began to sag.

SUMMARY: The homeowner who had many years ago already invested in piering his home for support, was proactive with solutions to repair his riverside home and the beautiful deck he had built. The first quote was for installing new metal sheeting to replace the failing wooden sheeting.
He was shocked to find that there was nearly a 2 year waiting list to complete this repair. Quoted just over $190,000, this repair would have taken three months to complete.

SOLUTION: RaiseRite Concrete Lifting, Inc., used the Deep Foamjection™ process to stabilize the soil to support the deck and prevent further erosion and loss of soils. Deep Foamjection™ is the process of injecting foam
to specified depths to increase the load bearing capacity of the soils. For this project RaiseRite installed 16 injection points approximately 5-10 feet under the ground. The foam used for this project was crucial because a truly hydro-insensitive foam was needed. HMI Hydrofoam was specifically designed for jobs where water or moisture is present.
This 4 lb. per cubic foot foam was designed to set up in the presence of water and to maintain dimensional stability in wet environments. This job was quoted at $10,000, saving the customer $180, 000. This process took the RaiseRite team one day to complete (8 hours) compared to 3 months it would have taken to install a new metal sheet-piling seawall. 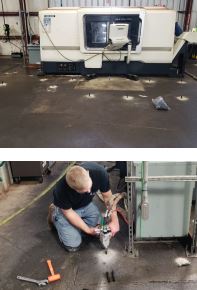 Problem: A machine company was having problems with their CNC machines. They were constantly needing to be leveled
in order to operate correctly, and efficiently. The Manufacturer of the CNC’s came to investigate. Using dial gauges, it was determined that the floor was moving with the vibration of the CNC’s workload.

Summary: A one inch void was found under the slab due to erosion; The shop was built on marshland. This allowed for no support causing the slab to deflect significantly.

Solution: RaiseRite was called and the work was completed in 6 hours. Using the EliteOne gun and HMI’s 501 polyurethane foam the void was filled, which stabilized the concrete slab. 501 polyurethane foam was chosen for this job because it provides a slower reaction time and further spread. Due to the distance this foam can travel, 501 is excellent for undersealing and stabilizing joints on rocking slabs from slab curl. The same dial gauge test was performed after the foam was injected, and showed no deflection. The CNC’s were re-leveled and operations continued. The only alternative would have been to tear out, and replace the entire slab. Which would have affected production greatly. By choosing to fill the void, they were able to continue production immediately following the repair

Home / About Us / Case Studies