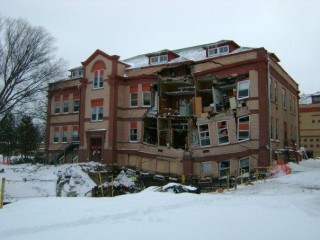 Amid an ongoing expansion project, a large section of the north side of the structure gave way during one evening leaving a gaping hole in the century-old building. The four-story, brick building had been undergoing an expansion project over several weeks. A construction crew had been excavating under the part of the building that collapsed. The excavation likely weakened the soil there, causing the foundation to collapse. Access to the building was restricted, which houses classrooms and offices. No one was inside the building during the collapse.

Due to weak soil conditions, the footings of the structure gave way and began to sink and slide away causing the collapse of the building. RaiseRite was contacted by Meineke-Johnson to perform foundation stabilization. RaiseRite needed to install 16 Atlas Resistance™ Piers in order to stabilize the structure for additional renovations.

Each pier was installed and field load tested to a verified bearing stratum some 100 feet below the surface. The structural load was transferred from the unstable soil under the footing to the Atlas Resistance™ Piers. Settlement was recovered and the structure was restored to the approximate original elevation.

RaiseRite successfully installed sixteen Atlas Resistance™ piers to support the remaining foundation. Each Atlas Resistance™ Pier was driven to a verified load bearing stratum using quiet and vibration free hydraulic equipment. The installation force and pier alignment were constantly monitored during the installation. When bearing was reached, each pier was load tested to a capacity greater than required to support the structure. This way each pier had a measured bearing capacity rating that was higher than the working load. This factor of safety insures that future settlement is highly unlikely.

Once all piers were installed the load was transferred to the piers using hydraulic rams connected to manifolds, which distributed hydraulic pressure evenly to each ram. After load transfer was accomplished, steel shims and hardened steel pins were installed to permanently support the foundation on the Atlas Resistance™ Piers.

A project log of the forces required to drive each section of pier pipe and the final load transfer forces, were then documented in the field.

Want to learn more about our foundation stabilization & repair services?

Get in touch today!