Fillfoam can flow long distances beneath the surface directly from access points. Void filling is faster and more cost effective than demolition and alternative methods.
With RaiseRite void filling, you can avoid heavy trucks and equipment required for using backfill or cement. Fillfoam is a great replacement for washout eroded soils.

No mess left behind, any excess Fillfoam will be neatly cleaned off the surface.

Ready to use immediately!

PROBLEM: Records water levels in Lake Michigan led to voids behind this 100 ft long seawall in Door County. High waters allowed water to wash up and over the sea wall daily. When this water drains back into the bay, it brings with it some of the soil under the slab. Without the support of this soil, the walkway settled. Because these levels could increase with high winds or additional precipitation, it was important to replace the eroded soils and support the concrete.

SOLUTION: A series of holes approximately 5 feet apart were drilled into the walkway. FillFoam™ was pumped as a flowable foam into one hole until foam traveled up through the next hole. This process continued until the complete void was filled.

SUMMARY: This project was completed in 4 hours and required 900 lbs of FillFoam™ to fill the void that was up to 4 feet deep. This foam filled the void and displaced the water collected under the walkway. The foam will not change shape or wash away like the previous soils did and will not interrupt the natural drainage of water back into the lake. This lightweight solution is also strong with over 20 PSI of strength. After the foam was cured, RaiseRite crews returned to install polyurethane foam to raise the walkway back to the original height.

Problem: A five year old Green Bay property had a six inch void under the driveway slabs. This void was due to a few different factors: poor compaction during construction, and a faulty drainage design where the down spouts would drain on the edge of the concrete and flow back towards the garage. This water then drained under the slab. As the water drained, it washed away the soils. This continued to happen for 5 years when the homeowner noticed the void that had developed.

Solution: RaiseRite as called and after discussion with the owner, FillFoam™ void filling foam was chosen to complete this voided area. The customer liked the benefits of being ready to use immediately, FillFoam™ would not wash away like the previous back flll, no heat, and FillFoam™ being environmentally friendly. Three one inch holes were drilled and approximately 1.5 cubic yards of FillFoam™ were installed. The job was completed in less than two hours while the homeowner was at work. 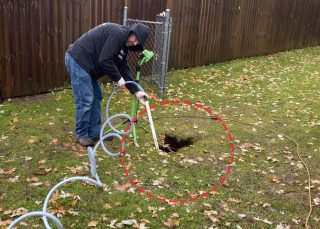 Problem: A homeowner from the City of Green Bay, Wisconsin was cleaning up his yard in late November of 2019 when the back tire of his lawn
tractor got stuck. Puzzled, the homeowner freed his lawn tractor and discovered that he had a large sinkhole in his yard. The hole
had an opening that was roughly three feet in diameter and expanded to about a six foot diameter at the bottom of the hole and was about five feet deep. The homeowner was confused as to how a sinkhole would have developed in his yard since he lived right in the city, only a few blocks from Lambeau Field. He contacted the city’s public works department who came out to his house and determined that the hole was not caused by ruptured water lines which could have caused washout or by an abandoned culvert.

Summary: Unsure of what do with the hole and concerned about its potential impact on his home’s foundation the customer contacted RaiseRite on a Friday afternoon. A representative from RaiseRite was at his home the very next Monday to inspect the area to see if the sinkhole could be addressed. Wisconsin sinkholes are relatively small with larger ones not developing more than ten feet across. Sinkholes in Wisconsin are often caused by limestone or dolomite in the ground. Limestone and dolomite is rock that is easily fractured and can dissolve by water. Water seeping down beneath the soil can cause erosion in the limestone or dolomite which can lead to underground cavities developing. Water will flow into these underground cavities taking the surface soil with it which in turn will cause a sinkhole. The summer and fall of 2019 had a large amount of rain in Wisconsin which is believed to have aided in the development of this particular sinkhole.

Solution: After observing the sinkhole and researching sinkholes in Wisconsin the customer was contacted and a plan to address the sinkhole was proposed to the customer on Tuesday, the very next day. Because the sinkhole was smaller and far enough away from the customer’s home, the plan was to fill the sinkhole with FillRite Technologies FillFoam and
monitor the area. FillRite Technologies FillFoam is a flowable fill foam engineered for large cavity and void filling. After the hole is filled the area will be observed over the upcoming winter and following spring to see if further action would be needed. At that point if continued settling of the area occurs, HMI’s Deep Foamjection™ process may be required to
stabilize the soil. Deep Foamjection™ is the process of injecting high density foam deep into soils to bind the soil and give soft soils stability.
The low-cost of FillFoam option made it an easy choice for the customer and RaiseRite was on-site that Wednesday and the sinkhole was filled by pumping 278 pounds of FillFoam into. Once the hole was filled topsoil was placed over the top of the FillFoam. Total time of project from arrival to clean-up was one hour.